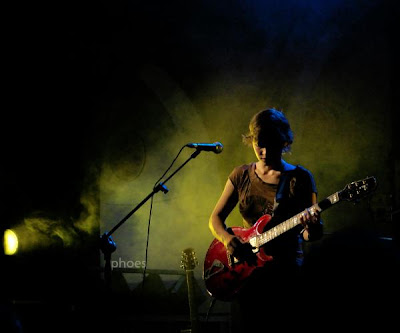 Kaki King (b. Katherine Elizabeth King, August 24, 1979 in Atlanta, Georgia) is an American guitarist and composer. King is known for her percussive and jazz-tinged melodies, energetic live shows, use of multiple tunings on acousticand lap steel guitar, and her diverse range in different genres.
In February 2006, Rolling Stone released a list of "The New Guitar Gods," on which King was the sole woman and youngest artist (beating Derek Trucks in age by two months as the youngest on the list).  In addition to a 10-year career that includes five LP and two EP albums, King has also scored music for television and film. She worked alongside Eddie Vedder and Michael Brook contributing music for the soundtrack to Sean Penn's Into the Wild, for which the trio received nominations for a Golden Globe Award for Best Original Score.
King was born the first of two daughters. While still a small child, her father noticed her natural musical ability, and encouraged her interest in music. She was introduced to the guitar at the age of four and played for several years, but after taking up the drums a few years later, they became her primary instruments as an adolescent. 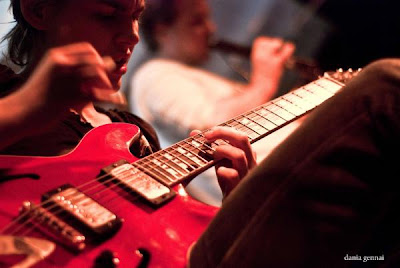 Convinced that her break in music would come from drumming, King played in bands in high school with classmate Morgan Jahnig, who would later become the bassist of Old Crow Medicine Show. On graduating from The Westminster Schools in Atlanta in 1998, the two friends attended New York University. While there, King picked up the guitar again, and revisited the finger-style techniques that intrigued her as a child. From there, King played a few occasional gigs andbusked in the New York subways.
After signing with Velour Records in 2002, King began recording her debut album, Everybody Loves You. She incorporated finger-style "fanning," with both flamencostyle percussion and fret tapping techniques, as well as using double open tunings, viola tunings, and traditional Russian guitar 7th tunings). On April 22, 2003,Everybody Loves You was released to positive reviews and feedback on King's skills as a guitarist in relation to her age.  While her later work involves more of a band format, Everybody Loves You is King's only fully acoustic guitar album, with the exception of light singing on the hidden bonus track, "The Government." To support the album, King embarked on her first major promotional tour in North America.
After King appeared on Late Night with Conan O'Brien, Sony Records offered her a deal with Epic records' Red Ink label. From there, King headed back into the studio to work on her sophomore effort, Legs to Make Us Longer. King began to incorporate different instruments and sound effects into her album, such as looping, light drum work on "Doing the Wrong Thing", and her first incorporation of Lap steel guitar with "My Insect Life." Produced by David Torn, Legs to Make Us Longer was released on Epic's Red Ink Imprint on October 5, 2004 to strong reviews.  In support of the album, King performed as an opening act for Eric Johnson during a leg of his 2005 tour, as well as completing her own nationwide and world tour.
At the end of her tour for Legs to Make Us Longer in 2005, King departed from her previous musical direction, out of a desire to escape being pigeonholed as a solo instrumental artist. She amicably parted ways with major label Sony/Epic and returned to her original label, Velour, to begin work on her third album ...Until We Felt Red. Released August 8, 2006 on Velour Records, the album features production work by Tortoise's John McEntire. With the prominence of electric guitar,shoegazing and effect boxes on the new record, and the addition of a full band, the music website AV Club called the sound a "post-rock makeover." She supported the album by going on tour with Sarah Bettens from K's Choice. 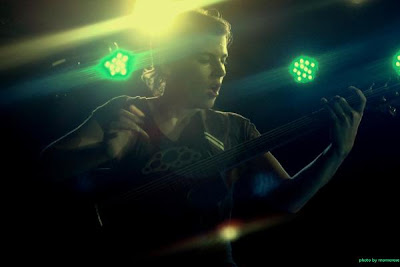 Dave Grohl invited King to appear as a guitarist on the track "Ballad of the Beaconsfield Miners", a song penned by Grohl for the upcoming studio album by the Foo Fighters. King agreed and is credited on the album, entitled, Echoes, Silence, Patience & Grace, released on September 25, 2007. On November 18, 2007, she joined Dave Grohl on stage to perform the track at the O2 arena in London. Grohl highly praised King's performance:

King toured with the Foo Fighters on the Australian leg of the Echoes, Silence, Patience and Grace tour. While on tour, King finished recording what became the Day Sleeper (Australian tour EP). It was released in late 2007, after King had finished work with Robin Williams on August Rush, and with Eddie Vedder and Sean Pennon Into The Wild.
King recruited Malcolm Burn to help with her newest effort, Dreaming of Revenge, and in December 2007 wrote about it in her blog: "I finished the new album. Don't get your panties in a tangle, it won't be released until next year, but it's done. And it's amazing." Filled with more melodic pop tunes than previous albums, Dreaming of Revenge was released on March 11, 2008 to highly positive reviews.  On March 4, 2008, iTunes released a full version ofDreaming of Revenge featuring the bonus track "I Need A Girl Who Knows A Map".[14] After filming a video for Pull Me Out Alive, she began her tour.
In the first half of King's tour, she headlined at The Roxy and toured with The Mountain Goats, which led to the exclusive release of Kaki King and The Mountain Goats EP Black Pear Tree EP. While touring Australia in 2008, King filmed part of the music video Can Anyone Who Has Heard This Music Really Be A Bad Person? in Sydney. Directed by Michael Ebner, the rest of the video was completed in New York in 2009. After completing the last leg of her world tour, King decided to tour once again with a strictly acoustic show. Dubbed 'The "No Bullshit" Tour', King did smaller shows throughout the US and UK that were specifically focused on acoustic works from her first albums along with stripped-down versions of her newer songs.
After completing her "No Bullshit Tour," King scored work on the independent film How I Got Lost, and started to record her next EP, titled Mexican Teenagers EP.Recruiting her band that she used from Dreaming of Revenge, King cut five new tracks for her new album.
After meeting with Carter Burwell to start work on the scoring for The Twilight movies, and completing work on Timbaland's Shock Value II, (which became Miley Cyrus' "We Belong To The Music") King began to outline her ideals for her 5th record. King's interest in Cold War novels, Russian spies and espionage themes, particularly that of double spies living in a double life, became the basis for her new album, Junior. Ranging from "lyrically from exuberance and anger to heartbreaking melancholy, and sonically from experimental pieces to accessible pop," Junior showcases her further maturation as a well-rounded artist that continues to defy categorization and expectations.

As with her previous album, 2008's Dreaming of Revenge, Junior was produced by Malcolm Burn and recorded at his studio in Kingston, New York. But in contrast to that record, which was marked by deep textures and layers as well as unusual instrumentation, Junior was specifically made with only three musicians in mind—in this case, King, multi-instrumentalist Dan Brantigan and drummer Jordan Perlson. The result was something more direct. "Prior to this I would have written a lot in the studio and played all the instruments myself," King says. "This time, I really leaned on Dan and Jordan to help shape the songs and help me get the record written."
King toured for five weeks in Europe in support of her LP Junior, on the Cooking Vinyl label. She later appeared as the musical guest on Late Night with Jimmy Fallon, sitting in with The Roots as a part of the house band, and began a US-based tour.
When asked by Premier Guitar Magazine what her plans were after completing her tour, King responded "I've been on the road for four months straight. In another three weeks, we’ll be done with this tour. Honestly, that's about as far as I can see."
King returned to her roots as a solo acoustic performer in 2011, going on her first tour without a backing band since 2005. King planned a tour with a collection of 7 rare instruments including a harp guitar, dojo, a custom 7-string nylon string guitar with fanned fret board, and a hybrid between a guitar and koto that King made herself.  Before beginning the tour, King performed with some of these instruments at the opening of an exhibit of Picasso's guitar paintings at the Museum of Modern Art in New York.  The tour began on February 24 in Mexico City and will end on July 23, 2011 in Italy.