Club 8 is a Swedish pop duo formed in 1995 by Karolina Komstedt and Johan Angergård. Their seventh album 'THE PEOPLE'S RECORD' will was released on May 12th 2010. The first single from the album is called 'Western Hospitality'. 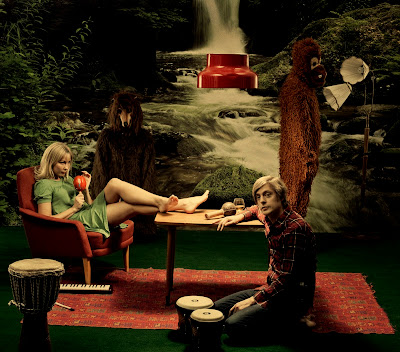 Formed in 1995, Club 8 were signed to the Spanish record label Siesta. They released a single called "Me Too" and an album calledNouvelle with an anorak pop sound.
In 1998, their second album The Friend I Once Had and the single "Missing You" were released. "Missing you" become a club and radio hit in Spain and somewhat of a college radio favorite in the US. The band started playing live. Their first gig was in New York at a March RecordsCMJ event in 1999. Their sound had by now developed into a more bossa nova and dance oriented one.
In 2001, Club 8's sound moved toward chill out and trip hop on its third, self-titled album. In the autumn of 2001, the band members locked themselves in Stockholm's Summersound Studios, writing songs and experimenting with Dub, C-86, trip hop, chill out, 80's, and bossa novasounds. The resulting album, released in 2002, is named Spring Came, Rain Fell.
The 2003 follow-up album, Strangely Beautiful, peaked at number 18 on the CMJ charts in the US. For the first time since 1999, the band released a single from the album and a corresponding video. Backed by five exclusive tracks, the song "Saturday Night Engine" was released as a single in the spring of 2003. The video made it to number 16 on the Up Northchart on MTV Nordic.
Afterward, Angergård formed a band called The Legends, which recorded 3 albums between 2004 and 2006. He also helped make an Acid House Kings album in 2005. In 2007, Club 8 released its 6th album The Boy Who Couldn't Stop Dreaming on Labrador.
Club 8's latest album, "The People's Record", was released May 18, 2010 and was produced by Jari Haapalainen.
Posted by Unknown at 12:01 AM