I just saw this band live with Agents of Mercy.  This band was BEYOND impressive!
Bill Bruford (Yes, King Crimson, Genesis etc.): I love the CD...the sheer skill and gusto with which they tackle it makes you laugh out loud. Great drumming. Jonathan plays and writes like a demon. Congratulations to them.
John Wetton (King Crimson, UK, Asia): 'Can't take you with me' is dynamite. I wish you luck, you're a good band, and deserve success, see you on the broad highway.
Roine Stolt (Flower Kings, Transatlantic): Your band is one of the very few I can see a real true potential in and I'm sure you have many new fabulous albums coming in the near future.
Jonas Reingold (Flower Kings, Karmakanic): Your band is great...I really dig your stuff, it would be fun to do something together in the future, keep up the good work, you´re one of the most talented progressive bands I´ve heard lately, good luck.
Jim Derogatis (NPR's "Sound Opinions", Rolling Stone Magazine): District 97 is a wildly ambitious progressive-rock group whose youth belies its accomplishments onstage and on its new "Hybrid Child" CD.
Paul Bielatowicz (Carl Palmer Band, Neal Morse): We made our way back to the hotel and I put on District 97's CD while finishing my nachos – what a GREAT album!
District 97 is undoubtedly the most musically adventurous rock band in the world to feature an American Idol Top 10 Female Finalist. 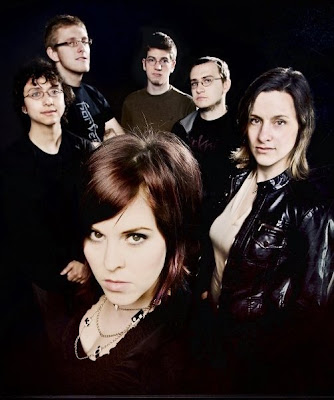 From their web site:
The band was formed in the Fall of 2006 by drummer Jonathan Schang, keyboardist Rob Clearfield, bassist Patrick Mulcahy and guitarist Sam Krahn (eventually replaced by current guitarist Jim Tashjian). The foursome from Chicago honed a no-holds barred style of Liquid Tension Experiment inspired Instrumental Rock before deciding the right vocalist was needed to complement their sound; enter 2007 American Idol Top 10 Female Finalist, Leslie Hunt. With a look, sound and stage presence comparable to a young Ann Wilson from Heart, Leslie's dynamic performances pushed the band into a new direction that forged a unique marriage between accessible, catchy vocal melodies and an adventurous instrumental prowess. She was followed shortly thereafter by one of Chicago's finest young guitarists, Jim Tashjian. With this new lineup of peerless musicianship in place, District 97 began wowing crowds and establishing a devoted fanbase through packed shows at legendary Chicago venues such as House of Blues, Schubas and Martyrs', along with appearances at festivals such as CalProg 2010 in Whittier, CA.

In May 2010, the band signed with Laser's Edge, the foremost home of new Progressive music. Laser's Edge oversaw worldwide physical and digital release of District 97's debut effort, Hybrid Child, which was released to worldwide acclaim in September 2010, and went on to top many "Best of 2010" lists. Appearing on the recording is cellist extraordinaire Katinka Kleijn of the world-renowned Chicago Symphony Orchestra, who also joined the band on select live performances from 2008 through 2010. Recorded with two of Chicago's best engineers, Manny Sanchez and Chris Harden (Billy Corgan, Fall Out Boy, Umphrey's McGee etc.), the album balances a meticulous attention to detail and studio-craft with the visceral power of a rock band firing on all cylinders. Running the gamut from Meshuggah-inspired metal, the epic majesty of Yes, and the melodicism of the Beatles, Hybrid Child unveiled District 97 as a true force to be reckoned with, and one that has taken the music world by storm. With fans ranging from high school students to world-class musicians such as Bill Bruford, John Wetton and Carl Palmer, it appears no one is immune from the alluring new sounds of District 97.
Posted by Unknown at 12:01 AM