Three places I REALLY want to see someday, I call them oddities in the USA and you shouldn't miss them either. 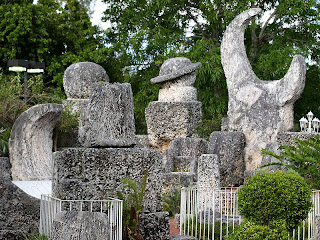 Coral Castle is a stone structure created by the Latvian American eccentric Edward Leedskalnin north of the city of Homestead, Florida in Miami-Dade County at the intersection of U.S. 1 (South Dixie Highway) and Southwest 157th Ave. The structure comprises numerous megalithic stones (mostly limestone formed from coral), each weighing several tons.  It currently serves as a privately-operated tourist attraction. Coral Castle is noted for the mystery surrounding its creation, considered to be built single handedly by Leedskalnin using magnetism and/or supernatural abilities. 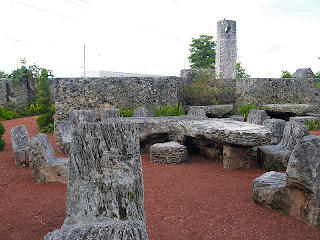 The grounds of Coral Castle consist of 1,100 short tons (1,000 t) of stones found in the forms of walls, carvings, furniture and a castle tower. While commonly referred to as being made up of coral, it is actually made of oolite, also known as oolitic limestone. Oolite is a sedimentary rock composed of small spherical grains of concentrically layered carbonate that may include localized concentrations of fossil shells and coral. Oolite is found throughout southeastern Florida from Palm Beach County to the Florida Keys.  Oolite is often found beneath only several inches of topsoil, such as at the Coral Castle site.


The stones are fastened together without any mortar. They are simply set on top of each other using their immense weight to keep them together. However, the craftsmanship detail is so skillful that the stones are connected with such precision that no light passes through the joints. The 8-foot (2.4 m) tall vertical stones that make up the perimeter wall have a uniform height. Even with the passage of decades and a direct hit on August 24, 1992 by the Category 5 Hurricane Andrew, which leveled everything in the area, the stones have not shifted.
Many of the features and carvings of the castle are notable. Among them are a two-story castle tower that served as Leedskalnin's living quarters, walls consisting entirely of 8-foot high pieces of stone, an accurate sundial, a Polaris telescope, an obelisk, a barbecue, a water well, a fountain, celestial stars and planets, and numerous pieces of furniture. The furniture pieces included are a heart-shaped table, a table in the shape of Florida, twenty-five rocking chairs, chairs resembling crescent moons, a bathtub, beds and a royal throne.
A 9-short-ton (8.2 t) revolving gate is the most famous structure of the castle and was documented on the television programs In Search of... and That's Incredible! The gate is carved so precisely that it fits within a quarter of an inch of the walls on both sides. It was so well-balanced that a child could open it with the push of a single finger. The mystery of the gate's perfectly balanced axis and the amazing ease with which it revolved lasted for decades until the gate suddenly stopped working in 1986. At that time, a team of engineers was brought in for consultation. In order to remove the gate, six men and a 50-short-ton (45 t) crane were utilized. Once the gate was removed, the engineers discovered how Leedskalnin had centered and balanced the 9-short-ton piece of rock. Leedskalnin had drilled a hole from top to bottom of the 8-foot-tall gate with no electric tools and inserted a metal shaft. The rock rested on an old truck bearing. It was the rusting out of this bearing that resulted in the gate's failure to revolve. The 9-short-ton gate, complete with new bearings, and a replaced shaft was lifted and set back into place on July 23, 1986.  The gate failed again in 2005 and was subsequently repaired, however it does not rotate with the same ease it once did.What is most remarkable about the contents of the Coral Castle is the massive size of the stones used throughout the construction, all the more remarkable when one considers that a single man assembled the entire site using only primitive tools. With few exceptions, the objects are made from single pieces of stone that weigh on average 15 short tons (14 t) each. The largest stone weighs 30 short tons (27 t) and the tallest stones are two monolithic stones standing 25 ft (7.6 m) high each. 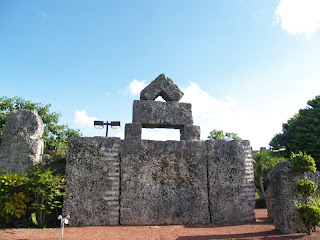 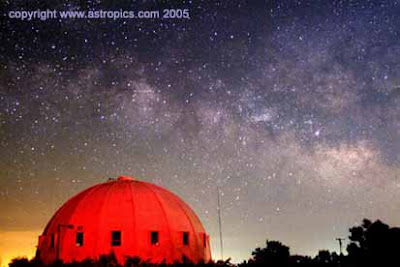 The Integratron is an
acoustically perfect tabernacle
and energy machine
sited on a powerful
geomagnetic vortex
in the magical Mojave Desert
The Integratron is a dome-shaped structure constructed out of plywood and fiberglass by George Van Tassel. He built the structure in Landers, California, USA as a "rejuvenation machine" supposedly following instructions provided by visitors from the planet Venus.
George van Tassel was a former aircraft mechanic and flight inspector who moved out to California's Mojave Desert to operate an airport and inn. During his time there, he supposedly began meditating under Giant Rock, which the Native Americans of the area held to be sacred. In August 1953, Van Tassel claimed that he had been contacted both telepathically and later in person by Venusians, who gave him a technique to rejuvenate human cell tissues. Van Tassel, acting on these instructions, began constructing the Integratron in 1954. Construction costs were paid for by an annual series of successful UFO conventions, the Giant Rock Spacecraft Conventions, which continued for nearly 25 years. Van Tassel was clearly inspired by earlier 1950s contactee George Adamski. Construction of the Integratron was supposedly complete in 1959, but Van Tassel continued to make minor modifications until his sudden death in 1978.
The Integratron, despite being built without nails, survived a magnitude-7.3 earthquake in 1992.
Read More Here!
Posted by Unknown at 12:03 AM