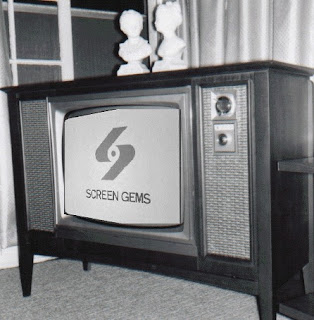 Found on TV's in the 60's and 70's, the above Screen Gems Logo struck terror into the souls of many children, myself included. I actually had nightmares about this "S" and more importantly perhaps, nightmares including the ominous sound that always accompanied the "S from Hell".  I'm not sure why this show ending animated logo and associated music made me so terrified, but it did.  Here is exactly what would appear at the end of now classic Screen Gems programs from my childhood like Bewitched, I Dream of Jeannie, The Monkees and The Partridge Family...


Not satisfied with only one version, the producers later released this shorter version...