The End Of The World 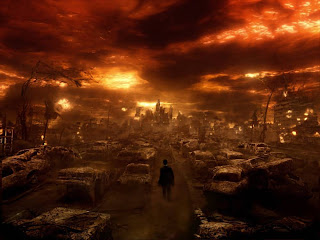 Look up December 22, 2012 on any popular search engine and you'll find article after article pertaining to the end of the world.  Here are a few reasons why so many people believe the world will come to an end on this date.
The Mayans also used another complex system of counting days related to a starting date they called the Birth of Venus. That date was set at Aug. 13, 3114 BC. This calendar was divided into uinals of 20 days, tuns of 360 days and longer periods of 7,200 days known as the katun, and 144,000 days called the baktun.

There is no doubt that since the year 2000 some very horrible events have occurred, but I will focus on just two recent events which greatly affected two very modern and globally revered entities...
The United States and Japan.
On September 11, 2001, a cataclysmic disaster precipitated by a vicious terrorist attack brought our great nation, the United States, to its knees.  Now known as the 911 attack, the skyline of New York, and the lives of Millions, would be forever changed.
On March 11, 2011, another great disaster, this time wrought by mother nature, struck Japan.  A magnitude 9.0+ Earthquake followed by a magnificently violent tsunami killed thousands.  It hasn't ended yet, and through the date of this post,  a nuclear disaster with implications still unmeasured, could kill thousands more.
These events seem related only by death, horror, and destruction, but is there something even greater at work here?  I think there could be.
Examine the dates:
09/11/2001 and 03/11/2011
next, apply simple math starting with the month...
09 + 03 = 12 or December
now the day...
11 + 11 = 22 or the 22nd
and finally the year...
1 + 11 = 12 or 2012
That's right, DECEMBER 22, 2012! Uh Oh!!


Leave your comments about what you think concerning this, I'd really like to hear your thoughts.
If you are interested in reading more about December 22, 2012, here are 21 Must Read 2012 Articles
I hope my math is wrong!
Posted by Unknown at 12:03 AM