What Did You Used To Watch?

A List of My Favorite Top Five Retro TV Shows

Back in the day, when I was a youngster, I used to watch TV.  A lot of TV.  I don't watch much any more, but I would probably start up again if they made shows like these...


Number 5 on my list of classic retro TV that I idolized goes to Ultraman. 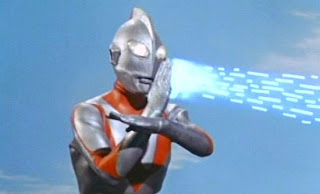 Ultraman was a series that took place in the far off future year of 1993.  The earth, Japan specifically, is constantly being threatened by giant monsters bent on destruction.  One organization known as The Science Patrol was tasked to take on this threat, specifically in outer space.  During one early mission,  protagonist Hyata collides with the ship carrying an extra-terrestrial good guy called Ultraman.  Ultraman is so stricken with guilt over killing a human that he merges his essence with Hayata to save them both.  Hayata goes back to work, but when monsters threaten the Earth, he uses the Beta Capsule to transform into the giant Ultraman taking on the evil menace.
I would like to add that for the majority of my childhood, only about 7 TV channels were available, 3 of them riddled with static, and I watched a black and white picture, no remote.  As I recall, the channels in our area were 3, 5, 8, 23, 25, 43, and 61.
Number 4 goes to Tennessee Tuxedo, a cartoon. 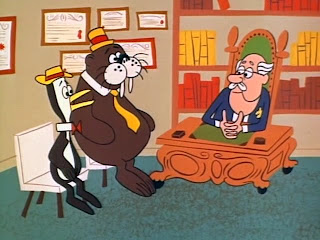 Here is a synopsis of the show from Wikipedia...
Tennessee Tuxedo and His Tales is a popular, semi-educational animated cartoon TV series that originally aired on CBS from 1963 to 1966. It was produced by Total Television, the same company that produced the earlier King Leonardo and the later Underdog, and primarily sponsored by General Mills. The title is a play on “tuxedo and tails” formal wear.

Tennessee and Chumley also had a big rival, in the form of Jereboah Jump the kangaroo rat (also voiced by Bradley Bolke). Some of the episodes would center around Tennessee trying to outsmart Jereboah at his own game, and succeeding in the end, of course. Jereboah later gains a henchman in a boxing tiger named Tiger Tornado (voiced by Kenny Delmar). Tennessee and Chumley were also constantly bedeviled by Rocky Maninoff (voiced by Jackson Beck impersonating Humphrey Bogart and whose name is an obvious pun on the composer and musician Sergei Rachmaninoff), a gangster who often called them “bo-bo's” and ordered them to do his will at the point of his machine gun.
Tennessee and Chumley regularly escaped from the zoo, only to find trouble in the outside world. Whenever Tennessee would propose a hare-brained scheme, Chumley was usually skeptical at first. Typically Tennessee would assure the dim-witted Chumley that his superior intelligence would carry the day, often with his catchphrase "Tennessee Tuxedo will not fail!" Chumley typically would respond with his own catchphrase, "Duh, OK Tennessee." When faced with more trouble than they could bear, the pair would turn to their friend, a college professor named Phineas J. Whoopee (voiced by Larry Storch), the “Man with All the Answers”. Mr. Whoopee, as he was known, was extremely knowledgeable on all subjects, and would frequently lecture the pair on such diverse topics as the physicsbehind the hot air balloon, to how musicians become popular. His lectures were illustrated and animated on the Three Dimensional Blackboard (3DBB for short), that he would retrieve out of an avalanche of junk from his overstuffed hallway closet. Other times the pair would have to overcome a personal problem, such as Chumley requiring treatment for a toothache but expressing his fear of the dentist (a common fear in many children). Mr. Whoopee used his blackboard to explain the history of dental science and how dental students must undergo much training to be very skilled with teeth. After Chumley overcame his fears and realized the dentist is his friend, Tennessee makes a suggestion that the two of them become doctors. Stanley Livingston overhears them, and tells the two that the first thing they can operate on is his motorscooter, which Tennessee wrecked while trying to pull Chumley's tooth himself (with a rope). At the end of each lecture with Mr. Whoopee, Tennessee praised his mentor with the line, “Phineas J. Whoopee, you’re the greatest!”
The pair would then attempt to use their newly gained knowledge to get out of the trouble they had created, but would invariably end up in more trouble with Stanley Livingston, who typically punished them in different ways ranging from having the police arrest them to making them scrub pots and pans for six months. Stanley even threatened to skin them alive many times. There were, however, a few times when they managed to succeed, such as a time where the pair (along with Baldy) formed a musical group and gained so much popularity that they managed to star in Stanley's music show while he was reduced to eating his hat (having said that he would if Tennessee's group got into his show).
On a Boing podcast, Underdog creator Joe Harris explained that after F.C.C. commissioner Newton Minow declared television a "vast wasteland" in terms of educational material, efforts were made to include education in programming. He added that with Tennessee Tuxedo, Tennessee and Chumley were portrayed as the ones who were being educated, so children would feel that they weren't being lectured to; even though in the end, they were.
Number 3 goes to a game show hosted by Bob Barker called Truth or Consequences
Check it out...


Truth or Consequences, an American quiz show, was originally hosted on NBC radio by Ralph Edwards (1940-57) and later on television by Edwards (1950-54), Jack Bailey (1954-55), Bob Barker (1956-75), Bob Hilton (1977-78) and Larry Anderson (1987-88). The television show ran on CBS, NBC and also in syndication. The premise of the show was to mix the original quiz element of game shows with wacky stunts.
The daily syndicated show was produced by Ralph Edwards Productions (later Ralph Edwards/Stu Billett Productions), in associated with and distributed by Metromedia Television (1966-78) and Lorimar-Telepictures (1987-88).
Number 2 goes to a fantastic show that I was surprised I could find so much information on.  It was a pleasure I kept hidden from most of my friends for fear they would make fun of me.  Later, as an adult, I found out I wasn't the only one watching it.  It always taught a good lesson, and was well produced.  The series was called Family Affair and it was a real gem!  I also had a crush on one of the characters known a Sissy, seen at the beginning of this clip.


Family Affair is an American sitcom that aired on CBS from September 12, 1966 to September 9, 1971. The series explored the trials of well-to-do civil engineer and bachelor Bill Davis (Brian Keith) as he attempted to raise his brother's orphaned children in his luxury New York City apartment. Davis's traditional English gentleman's gentleman, Mr. Giles French (Sebastian Cabot), also had adjustments to make as he became saddled with the responsibility of caring for 15-year-old Cissy (Kathy Garver) and the 6-year-old twins, Jody (Johnny Whitaker) and Buffy (Anissa Jones).
The show ran for 138 episodes. Family Affair was created and produced by Don Fedderson, also known for My Three Sons.
As discussed by Kathy Garver on the final season’s DVD features, the show’s cast suffered several deaths. Anissa Jones died of a drug overdose in 1976 at age 18. Sebastian Cabot died of a stroke in 1977 at age 59. In 1997, two months after the suicide of his daughter, and having lived with cancer for some time, Brian Keith committed suicide by gunshot.[2] In 2002, Gregg Fedderson died of cancer at age 53.
And now coming in at NUMBER 1 - Lost in Space 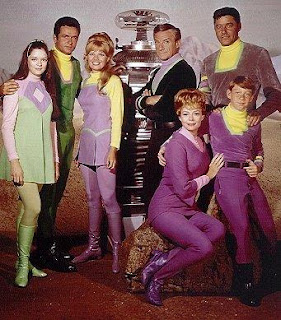 I'm not sure what it was about this show, but I absolutely LOVED every episode!  Here is what Wikipedia says about it...
Lost in Space is a science fiction TV series created and produced by Irwin Allen, filmed by 20th Century Fox Television, and broadcast on CBS. The show ran for three seasons, with 83 episodes airing between September 15, 1965, and March 6, 1968. Their first TV season was filmed in black and white, but the rest of them were filmed in color. In 1998, a Lost in Space movie, based on the TV series, was released.
Though the TV series concept centered on the Robinson family, many storylines focused primarily on Dr. Zachary Smith (Jonathan Harris), originally an utterly evil would-be killer who became a sympathetic anti-hero by the end of the first season, providing comic relief to the TV show (and causing most of the episodic conflict).
PLOT:
It is October 16, 1997 and the United States is proceeding towards the launch of one of history's great adventures: man's colonization of deep space. The Jupiter 2 (called Gemini 12 in the pilot episode), a futuristic saucer-shaped spaceship, stands on its launch pad undergoing final preparations. Its mission is to take a single family on a five and a half year journey (stated as 98 years in the pilot episode) to a planet of the nearby star Alpha Centauri (the pilot episode refers to the planet itself as Alpha Centauri), which space probes reveal possesses ideal conditions for human life. The Robinson family was selected from among 2 million volunteers for this mission. The family includes Professor John Robinson (Guy Williams), his wife, Maureen (June Lockhart), their children, Judy (Marta Kristen), Penny (Angela Cartwright), and Will (Billy Mumy). They will be accompanied by their pilot, US Space Corp Major Donald West (Mark Goddard), who is trained to fly the ship in the unlikely event that its sophisticated automatic guidance system malfunctions.
Other nations are racing the United States in the effort to colonize space, and they would stop at nothing, even sabotage, to stop the US effort. Dr. Zachary Smith (Jonathan Harris), a medical doctor and environmental control expert, is actually a foreign secret agent. He reprograms the Jupiter 2's B-9 environmental control robot (voiced by Dick Tufeld) to destroy critical systems on the spaceship eight hours after launch. Smith is trapped aboard at launch and his extra weight throws the Jupiter 2 off course, causing it to encounter a meteor storm. The robot's rampage causes the ship to become lost.
The Robinsons are often placed in danger by Smith, whose self-centered actions and laziness endanger the family. In the second and third seasons, Smith's role assumes a less evil overtone – although he continues to display many character defects. In "The Time Merchant", Smith travels back in time to the day of the Jupiter 2 launch, with hope of changing his fate. He learns that without his weight altering the ship's course, it would be destroyed by an uncharted asteroid. In an act of redemption, Smith elects to re-board the ship, thus saving the Robinsons' lives.
Here is the theme song...
This list is the short version, as the list of shows I enjoyed in the late 60's through early 70's is a very long one.  While writing this post, more and more shows came to mind.  If you enjoyed this post, I urge you to look at wikipedia entries and YouTube videos for a few other favorites which included:
I am sure that all of these shows, as well as others I've forgotten, had a profound influence on who I am today.