Mystery Of The Birds

Why did thousands of Red Winged Blackbirds fall from the sky New Years Eve 2010 in Beebe, Arkansas? We may never know the answer to this odd occurrence. It was around 11:30 PM December 31, when calls started flooding in to The Arkansas Game and Fish Commission from concerned residents reporting birds falling from the sky by the thousands. A street worker thought it was a joke when he received a call from the town Mayor at 4:30 AM, January 1, stating that dead birds were everywhere. 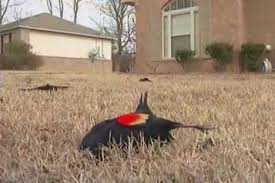 What could have caused this kind of mass bird droppings? An aerial survey revealed that all the avian casualties dropped within a one-mile stretch of town, and even as the AGFC dispatched wildlife officer Robby King to the scene MANY hours later, birds continued to drop. He collected about 100 corpses, and necropsies began yesterday. Theories to explain the sudden death of the blackbirds have come thick and fast. Speaking to CNN Radio on January 2, Karen Rowe, an ornithologist for the AGFC, said that the incident isn't that rare, and is often caused by a lightning strike or high-altitude hail.

I completely disagree with Karen's theory. The birds began falling at 11:30 PM on the 31st of December, and were still falling as late as 5:00 AM on January 1, 2011. Hail? for 5 hours straight? Lightning? Without a storm anywhere near? OK. Karen is clearly on something. I would be just as likely believe alien foul play, or a sign from God. Mass meteorite storm anyone? Whatever the cause, it's pretty weird, and I for one am waiting for a LOGICAL explanation from someone with a little more on the ball. Karen, master of the obvious, continues, "Something must have caused these birds to flush out of the trees at night, where they're normally just roosting and staying in the treetops ... and then something got them out of the air and caused their death and then they fell to earth." Ya think, Karen?

OK, here's a viable explanation... Officials speculated that fireworks set off by New Year's revelers could have startled the birds from their roost, and caused them to die from stress. Of course!... Why didn't I think of that? The exact same reason that birds fall dead from the sky when hunters shoot at them. Stress. No, wait, that's caused by gunshot wound. Damn, foiled again!

According to the Press Association, workers from the U.S. Environmental Services removed the final bird at 11am on Sunday morning. Residents were told that the workers wore hazmat suits as a matter of protocol and not because they feared contamination. Right!

CLICK THE LINK BELOW FOR MORE BREAKING NEWS ABOUT THE DEAD BIRDS...

Over 100,000 fish have also been found dead in the Arkansas River in Franklin County, around 125 miles northwest of Little Rock. Officials now report that the drum fish have died along a 20-mile stretch of the river.

If I lived anywhere near these occurrences, I'd be GONESVILLE!!!

ANOTHER UPDATE!!!!...
Today in LaBarre, Louisiana, about 500 dead blackbirds and starlings were discovered, say wildlife officials. The birds were discovered lying dead on roads between Morganza, La. and New Roads, La. on highway 10.