I have decided to make Friday the day I introduce you to COOL musical artists you may or may not know about.  Here is the first in my series of "Cool Music Fridays"...
Phoenix 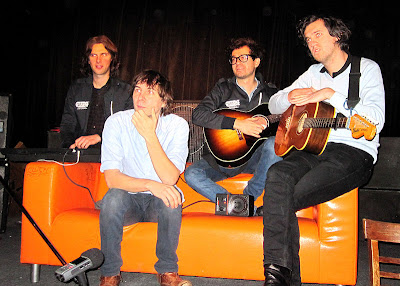 
The French group Phoenix draw elements from their eclectic '80s upbringing to arrive at a satisfying synthesis of rock and synthesizers. Vocalist Thomas Mars, bassist Deck d'Arcy, and guitarist Christian Mazzalai were a garage band based out of Mars' house in the suburbs of Paris. Mazzalai's older brother Branco joined the band on guitar when his band Darlin' disbanded in 1995.
The group got its touring start on the French bar circuit doing Hank Williams and Prince covers to drunken audiences. Two years later the band took on the name Phoenix and pressed 500 copies of a single on its own label, Ghettoblaster. The A-side was a punk rock song and the other a chugging Krautrocker, hinting at their eclectic tastes. Shortly after, they were signed to the Paris-based Source Records. Phoenix became well acquainted with labelmates Air when they acted as their backing band on several U.K. TV appearances. The result of the electronic exposure was a single called "Heatwave," which was very similar in approach to '70s disco.

United, the group's debut album, appeared in 2000 on Astralwerks and was recorded over two months. The album featured guest appearances from friends and family, including Thomas Bangalter (Daft Punk), Philippe Zdar (Cassius), and d'Arcy's mother's choral society on the track "Funky Squaredance." From that point, they issued Alphabetical (2004), It's Never Been Like That (2006), and their mainstream breakthrough, the critically adored Wolfgang Amadeus Phoenix (2009). Part of the extended break between the third and fourth albums was due to Mars becoming a father (with his partner, director Sofia Coppola, Rovi

Hope You Enjoy Phoenix!
Posted by Unknown at 12:01 AM