Do you believe in Ghosts?  Have you ever seen a ghost?  Think there are no "good" photos (even videos) of ghosts?
Think again... 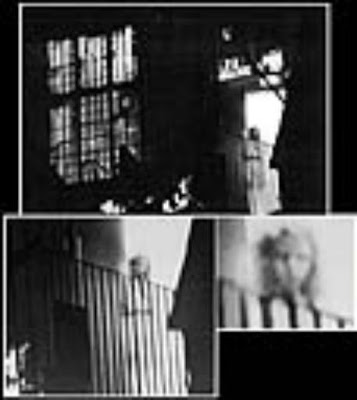 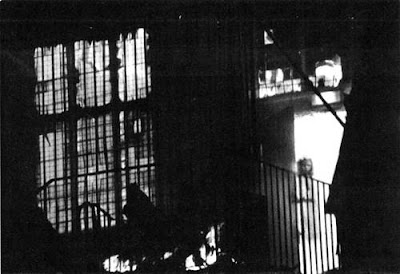 This may be the greatest ghost photo ever. It was taken about 10 years ago in Shropshire, England at Wem Town Hall. Resident Tony O’Rahilly using a telephoto lens captured many images of Wem Town Hall as it was being destroyed by a fire. In one of the photos, Tony was shocked to see what looked like a small girl standing in a doorway. In 1677, a devastating fire destroyed much of Wem’s wooden buildings. The fire was rumored to have been accidentally started by a 14 year-old girl named Jane Chum, who also died tragically in the fire. Her ghost still haunts the town. 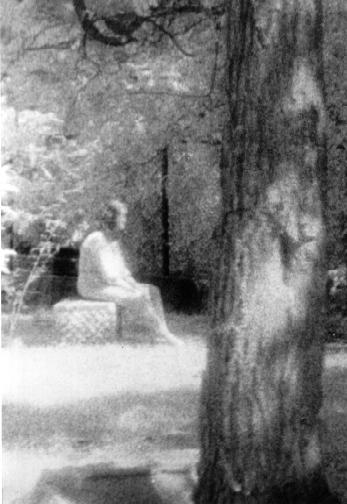 This photograph appeared in both the Chicago Sun-Times and the National Examiner. It was taken during an investigation in Bachelor's Grove Cemetery on August 10, 1991 with a group of GRS members. The picture is an enlarged black and white infrared shot taken of an area where many of the group noticed something unusual with some of the equipment they used. It shows a young woman sitting on a tombstone with parts of her lower and upper body being somewhat semi-transparent. The dress she is wearing is also out-of-date. It was taken by member, Jude Huff-Felz. 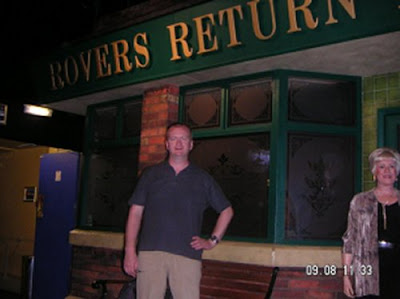 Pauline Brannigan took this photograph at the Blackpool waxworks UK 9th August. It clearly shows a face behind her husband. The strange thing is that the photo was taken at the coronation street exhibit (long running UK soap) it shows the face of who some think may be Ena Sharples who died in the 1980's and was one of the original main characters. Ena died in Blackpool and was buried there. 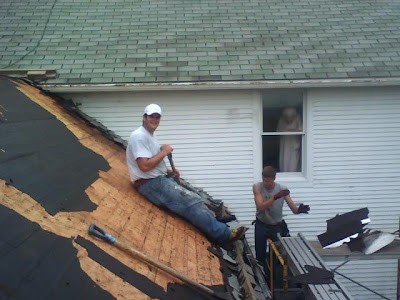 Men working for a roofing outfit from Tremont, Illinois snapped this photograph with a camera phone.  The story is they were hired to roof the house by the new owners. According to the workers, the lady who lived there had passed away nearly three months before. They had been working on the house for two days and had seen no one there. 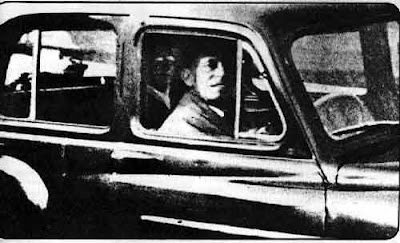 Mrs. Mabel Chinnery was visiting the grave of her mother one day in 1959. She had brought along her camera to take photographs of the gravesite. After snapping a few shots of her mother's gravestone, she took an impromptu photo of her husband, who was waiting alone in the car. At least the Chinnerys thought he was alone.
When the film was developed, the couple was more than surprised to see a figure wearing glasses sitting in the back seat of the car. Mrs. Chinnery immediately recognized the image of her mother – the woman whose grave they had visited on that day. A photographic expert who examined the print determined that the image of the woman was neither a reflection nor a double exposure. "I stake my reputation on the fact that the picture is genuine," he testified. 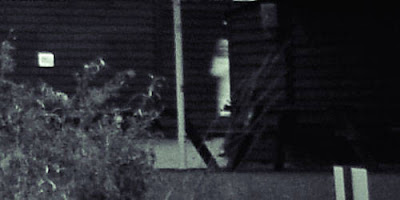 This amazing photo was taken by photographer and graphic designer Neil Sandbach in 2008. Neil was photographing some scenic shots at a farm Hertfordshire, England, as part of a project for wedding stationery; the couple planned to have their wedding ceremony held there.
Later, Neil was astonished when he examined the digital photo on his computer. There, as if peeking around a corner at him, is a ghostly, white, almost glowing figure of what looks like a child. Neil says he is quite sure there was no one there at the time.

There is further corroboration that this is a true ghost photo. Neil had shown the couple the anomalous photo, and before the wedding they asked the staff at the farm if they had ever had any spooky experiences there. They did not mention Neil's photo. Indeed, they admitted that the figure of a young boy, dressed in white night clothes, had been seen on several occasions around the barn.

Apparently, this is the ghost that Neil photographed.